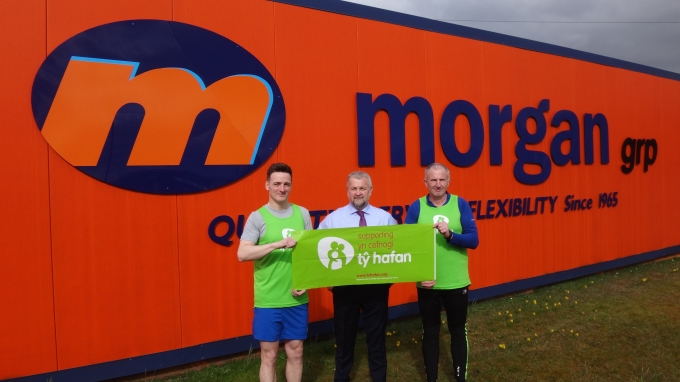 Two of our Morgan Marine colleagues, who will run in the upcoming Newport Marathon, have already got their training off to a flying start, with some expert mentoring from the first British finisher of the 2017 London Marathon, and current Gold Coast Commonwealth Games competitor, Josh Griffiths.

Steve Evans and Rhydian Jones, who are both long-term employees of Morgan Marine, will lace up in April to raise money for Wales-based children’s palliative care specialists, Ty Hafan.

Not only have the pair already raised around £2,000, thanks to the generosity of their colleagues and suppliers, they also have an expert runner in their camp, helping them with their training.

Steve said: “Rhydian and I are both looking forward to the Newport Marathon and we are very fortunate to have so much support from all quarters. Josh is from my home village of Pen-y-Groes, he is passionate about running and he is keen to support other athletes, so he has been very generous with his time and advice.  Although he is world-class – he is in Australia at the moment representing Wales in the Commonwealth Games -   he hasn’t been piling the pressure on us. Instead, he has emphasised the importance of finishing the race rather than pushing us too hard on our times.

“And Morgan Marine has always been supportive of staff members who get involved in charity events like this one. I have worked for the company for 27 years and I have completed a marathon in the Brecon Beacons and a bike ride from John O’Groats to Lands End, with our Group CEO, Martyn Ingram, matching the funds I raised, which was much appreciated. All of our Morgan Marine colleagues have been very generous and supportive.”

Rhydian too is a seasoned runner, with two marathons  already behind him, and the pair hope to reach a healthy tally for Ty Hafan.

Steve added: “I was able to spend some time at Ty Hafan at the time of my John O’Groats bike ride and the young people there stay with you. It is such an important charity, helping local youngsters live the best life they can, so hope we can do them proud.”

Morgan Marine’s suppliers are also backing Steve and Rhydian in their marathon bid, with Gavin Griffiths, MD of Griffiths Pallets already donating a generous £1,250, including £1,000 from the All Wales Truck Show, which Gavin chairs.

To support Steve and Rhydian in their Newport Marathon bid for Ty Hafan, on 29 April, please donate via Just Giving here: https://www.justgiving.com/fundraising/rhydianandstevemarathon